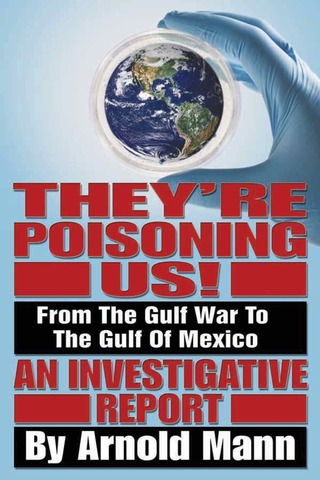 Click on the link below to purchase the book

Review by Katherine Duff, The Townsend Letter, The Examiner of Alternative Medicine, February/March 2012

What can an investigative reporter contribute to the discussion of chemical sensitivity? In the case of reporter Arnold Mann and his book They're Poisoning Us! – plenty, as it turns out. In this book, we are shown a picture of this castoff illness through its history, interviews with researchers and treating physicians, the events that continue to add to those affected, and the many levers of power that control the issue.

Mann came upon this subject while researching an article he was writing for Time magazine. The subject was the emerging problem of sick building syndrome and mold that took him to a large cluster in an airline reservation center in Texas. It was there he learned the true scope of the problem the sick were coping with and the resulting chemical sensitivity that for many would end up dictating the rest of their lives.

The historical perspective takes the reader back to the work of Theron Randolph, in the 1950's, who was the pioneer in identifying and treating chemical sensitivity. An allergist with an impeccable pedigree, he soon found himself at odds with other allergists when he questioned the reliability of allergy testing and suggested that the immune connection is not all there was.  As his research continued, he was ostracized by the medical community and under attack by commercial interests, but he did not give up and is now regarded as the father of environmental medicine.

Mann's investigative skills are evident in his recognition of Dr. Eloise Kailin's early work on chemical sensitivity. In the 1960's she conducted double-blind studies on some of her chemically sensitive patients that demonstrated a neurological origin of chemical sensitivity.  Unfortunately, her efforts to train other doctors went nowhere and her published studies were ignored.  Of the many books written about chemical sensitivity, Mann's is the first, that I am aware, to give Dr. Kailin credit for her significant contribution.

There are few researchers and treating physicians working on chemical sensitivity but against great odds they are developing a body of work that is offering answers and hope.  It took decades for anyone to build on the work of Dr. Kailin's brain connection to chemical sensitivity and the first to do so was Dr. William Meggs.  His worked focused on neurogenic inflammation and airway remodeling. Another who has made great strides is Dr. Claudia Miller who saw new chemical sensitivities in sickened Gulf War veterans. Her work has led her to rename chemical sensitivity, Toxic Induced Loss of Tolerance (TILT) as it better describes the condition and its onset.  She also developed a screening questionnaire used by physicians to assess their chemically intolerant patients. This peer reviewed tool is called the QEESI for Quick Environmental Exposure and Sensitivity Inventory.  She has made it available for free at her website: drclaudiamiller.com.

The toxic battlefield of the first Gulf War saw a leap in funding and research that would benefit the understanding of chemical intolerance.  Dr. Robert Haley has been foremost in this research.  Under a mandate from Congress in 2005, Haley's research was funded and he was freed from any requirement of researching stress as the cause of the illnesses, the preferred diagnosis.  Haley, an epidemiologist designed most comprehensive studies that eventually led the once skeptical doctor to conclude that yes – the many symptoms of the veterans were due to wartime exposures and the brains of these soldiers are showing abnormalities.

This marvelous research is demonstrating a new paradigm of medicine, one that is being born with a pre-existing set of enemies. Just as Dr. Haley saw his contract cancelled and his funding stopped, other researchers have had funding proposals denied. The manner in which this is done to these individuals is woven through their interviews.  Whether it is a doctor threatened with removal from insurance company provider lists, researchers denied funding, or outright attacks from colleagues, chemicals in our society have powerful defenders who place liability concerns over public health. In this book, Arnold Mann gets it.  Our government, medical associations, employers, property owners, and insurance companies have come together to create a formidable foe for individuals whose lives have been decimated with illness and poverty.  In this atmosphere, the best many can hope for is Social Security Disability approved under a mental illness diagnosis.  This Mann demonstrates in the case of a sister of a powerful United States senator.

Mann does not leave us without hope though. He interviews physicians who are currently treating chemically intolerant patients and helping them. If one puts together his interviews with Dr. William Rea, Dr. Kaye Kilburn, Dr. Meryl Nass, and Dr. Grace Ziem, it is easy to see there are common modalities.  Most agree that avoidance and detoxification are important. Some are looking into new treatments as well.  Some have websites that can help the sick person as well, such as Dr. Ziem's website: chemicalinjury.net.

I don't know how many more decades of newspaper articles about the curious cases of people living in avoidance of chemicals, complete with the catfight among the experts, will continue to entertain the readership. And how many more disasters such the oil spill in the Gulf of Mexico will we tolerate dumping ever more victims onto the pile only to ignore their illnesses and label them mental cases. The negligence is getting old and unbelievable. For more and more of us who have already been affected or know someone who has, the real question is – What is going on here?

That is where this author has taken a giant leap.

"Arnold Mann's reporting on environmental toxins and resulting illnesses has enabled patients and doctors to look beyond the obvious for answers to mysterious symptoms. His earlier reporting saved lives; this book will save countless more."

"This book truthfully is the only book I have ever begun to read and couldn't put down until I was finished. The quality of writing and subject matter – it's a Masterpiece!"

Nominated for the NAACP Image Award for Nonfiction Literature